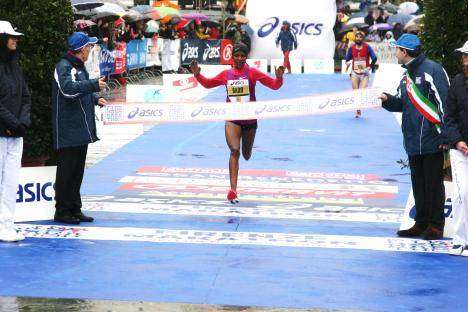 The 27th edition of the Florence Marathon was rainy but thrilling.

Weather forecasts had predicted rain for the day and they proved to be right. The rain started falling at the first hint of daybreak, and the 10,400 runners raced along a course that was made more challenging and slower by the weather conditions.

Notwithstanding the rain, the competition was exciting and offered an unexpected conclusion: a first-time participant managed to win the marathon after a thrilling final sprint.

After leaving the start area of Viale Michelangelo, the favourites moved into the lead of the race. There were nine of them and they raced in a pack for the first few kilometres.

Among them were Merga, Robi, Etana, Tadesse, Kenei, Gelana, Ben and Tola.

At the 13th kilometre an African runner fell behind, slowed down and then dropped out. Further ahead, others started to fall behind the lead pack. The first was Tariku Jufar Robi, then Kiprotich Kenei and finally Ejigu Ebisa Merga, who remained in 4th position giving the impression of being the only one who was likely to challenge the lead. However, at the 19th kilometre the group formed by Edea Bane Tola, Theshome Gelana and Aredo Tolesa Tadesse increasingly pulled away from Merga, who gradually fell behind. The three Ethiopians were racing at a pace that was unsustainable for the other runners and in the first half of the race it was already clear who the top finishers were going to be. Victory was already firmly in Ethiopian' hands.

For more than ten kilometres they raced closely together, keeping an eye on each other and sometimes talking briefly. Meanwhile, the rain didn't want to go away, but the Florence spectators didn't seem to mind the bad weather and kept cheering on the runners for the whole race, supporting them through the difficulties they faced. The 31st kilometre seemed to be the turning point of the marathon: Tola, who had led the group from the start, broke away from the others and increased the gap. The other two Ethiopian runners couldn't keep up with his pace.

It seemed clear that the victory was his and no one could stop him. Tola's pace was steady, behind him Tadesse and Gelana kept running shoulder to shoulder.

But just when it seemed that Tola was already assured the victory, in the very last kilometres, his pace suddenly slowed and became laboured. The obvious consequence was that the other two runners, who had been with him until the 31st kilometre, managed to overtake him. The final battle was firmly in the hands of Tedessa and Gelana, who attempted a final sprint.

Aredo Tolesa Tadesse won with a time of 2h12’41", while Gelana crossed the finish line fractions of a second later. However, Tola managed to keep the 3rd position and completed his race in 2h13’30".

In the women's race the winner was Tufa Firehiwot Dado with 2h28’58", behind her the Ethiopian Meseret Mengistu and the Russian Alena Samokhvalovn.

The 27th edition of the Florence Marathon is now over. Thanks to the efficient organisation, everything went smoothly despite the rain. The Florence spectators participated in the event with their usual enthusiasm.