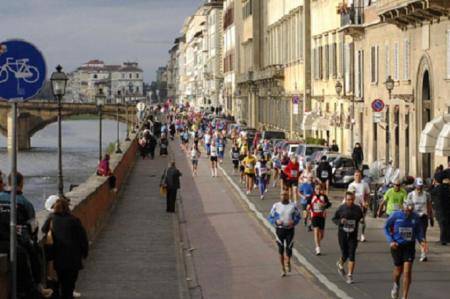 The 27th edition of the Florence Marathon, the showcase sports event due to take place on the 28th November in the enchanting Tuscan city, is going to feature an exciting new route.

The Race Director of the Marathon Giancarlo Romiti, Florence Deputy Mayor and Sports Committee Chairman Dario Nardella, the President of the Florence Olympic Committee Eugenio Giani and officers from the City Council Transport Committee gathered together in the Palazzo Vecchio building to launch the event.

“The Florence Marathon,” said the President of the Organising Committee Giancarlo Romiti, “is a major event for the city, which will host over 20,000 people who will stay in the city for at least two days in a period in which tourism is relatively low. I think that the benefits for the city will more than compensate for the inconvenience of the temporary changes to traffic regulations necessitated by new route. There will be musicians and other events to entertain both the runners and the spectators along the route. I want to thank the organisers, the army of 1,700 volunteers, the security personnel, the first aiders, and all the people who are working to ensure the success of the Florence Marathon.”

The 27th Florence Marathon is preparing a pleasant surprise for the thousands of sportspeople from all over the world who will be on the start line on 28th November: a much faster route which conforms to IAAF regulations with a height difference of about 40m between the start line and the finish line. This innovation was made possible by the cooperation between the marathon organisers and the City Council, who worked to improve the quality of this international event.

“This year's edition,” said Florence Deputy Mayor Dario Nardella, “marks the start of a new era for the event, making it competitive with the biggest marathons in the world. This brave step forward brings a successful conclusion to the hard work carried out by the organisers and the City Sports and Transport Committees since the beginning of this year. For the first time the runners will race through the historic Poggi avenues and I can assure the highest commitment from the City Council and the event organisers to reduce any inconvenience to a minimum.  We will be providing information and communication between now and 28th November with this in mind. Welcome, then, to the runners, who will be the stars of the event and will give the city a fantastic day of sport.” Eugenio Giani, the President of the Florence Olympic Committee, also gave a welcome message to all the participants in the event. “The Marathon is an event that increasingly involves the whole city, attracting tourists in a period of the year perfect for visiting Florence and its museums. The Florence Marathon is in the top ten marathons in the world based on the number of runners and second in Italy, behind Rome.  After almost 30 years of the event, the city is now ready to make a little effort and temporarily close some of the avenues to traffic. Television coverage by RAI will guarantee great publicity for the Marathon and Florence, giving the city greater visibility - both in duration and quantity of broadcasts - than it has during the rest of the year.”

The start area on Sunday 28th November will be the wonderful panoramic terrace of Piazzale Michelangiolo, a distinctive and irreplaceable element of the Florence Marathon, one of most scenic 42-kilometre marathons in the world; in this edition, the start line has been moved to Viale Michelangiolo, on the other side of the hill, from where runners will descend towards Piazza Ferrucci. This change of route will allow the runners to race along the wide tree-lined avenues of Florence for the first time and avoid overcrowding in the early stages of the race, when the runners are still grouped together. After passing through some of the ancient gates of the city, the route continues towards the breathtaking green area of Parco delle Cascine. After the park, the route passes through the characteristic atmosphere of the Oltrarno, the left bank of the river, and then the Varlungo area, before returning back towards the heart of the city and the historic centre, along roads laden with history, where buildings and monuments of rare beauty can be admired: Palazzo Pitti, the Cathedral, Palazzo Vecchio and, just before the finish line located in the magnificent Piazza Santa Croce, the unique arches of Ponte Vecchio bridge.

The Ginky Family Run (a 2-kilometre non-competitive race for children, teenagers and families) and the Marathonabile (a race for disabled runners) will take place alongside the Florence Marathon. In addition, on Friday 26th November the second edition of “The Fastest and Strongest in Florence” will take place, an event for students of the primary and secondary schools of the city, who will gather together on the running track of Luigi Ridolfi stadium, near the Marathon Expo.

The 2010 Florence Marathon is coming up http://runningpassion.lastampa.it/news/the-2010-florence-marathon-is-coming-up-949900 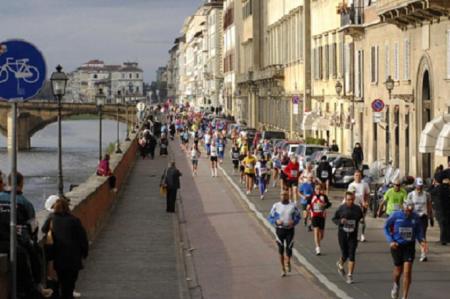